Bregenz is a small but culturally buzzing town on the Austrian border of Lake Constance. You might have heard of the stunning art museum by Peter Zumthor, the world biggest sea stage featured in a Bond thriller or of Bregenz being the home town of Stefan Sagmeister. But have you been to the bi-annual design conference VLOW! yet? If not, do so.

The conference´s name refers to the state of intense engagement known as “flow” pronounced in regional dialect. The conference´s mission is to map the territory between 2- and 3-D design. Speakers this year ranged from Norwegian architectural practice Snøhetta, Swiss poster king Niklaus Troxler, to the experimental work of Studio Moniker in Amsterdam. But to report back from the conference by summing up the speaker´s works and words would not paint an appropriate picture of the VLOW!. Why?

Because it was not only for meeting interesting designers that I undertook the long journey from Berlin to Bregenz, it was also to meet 400 fellow attendees. For this is the conference where the audience becomes part of the program through a cleverly designed meeting architecture by conference curator Hans-Joachim Gögl and his team. How do you convey this feeling of community and empowerment that comes with actively engaging on such an occasion?

It was the conference itself that gave me the answer, by inviting everyone to submit questions to work on in mini-workshops. So I found myself hosting an impromptu workshop to discuss just that very question: How to write about the VLOW? Luckily a lot of people seemed to have pondered this and wanted or needed to write about the conference, some in a professional context, some reporting back to the colleagues in the office. 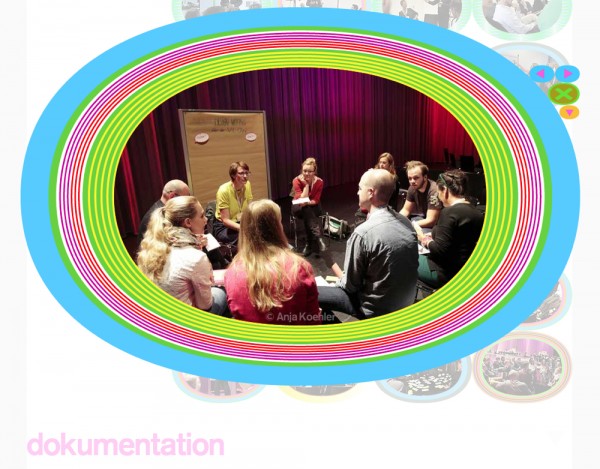 We started out by asking ourselves what we wanted to write about, further than the obvious points such as the theme and mission of the VLOW! or the choice of speakers. This is what we came up with as VLOW! characteristics in three consecutive seasons:

And  then the even more interesting question on how can we write about it?
Roughly the ideas can be sorted into three groups. First there was a feeling that such a participative conference should opt for an open source style of documentation, portraying and including the crowd into it´s generation. One person summed this up as a VLOWkipedia, which might include the following:

Secondly there were a lot of ideas concerned with shifting the perspective of the writer and combining multiple perspectives into one report. This might imply using other media than words, possibly graphic recording or a photo story. Suggestions included reporting:

Finally, nobody wanted the VLOW! to end. Ideas for letting the conference live on included:

We left with a bag full of ideas, a pile of business cards and the incentive to share what we would write.  On my way back home I decided that it was this experience that for me best sums up the VLOW! experience for me.

Here is the review of the VLOW! itself and here is what fellow attendees wrote: