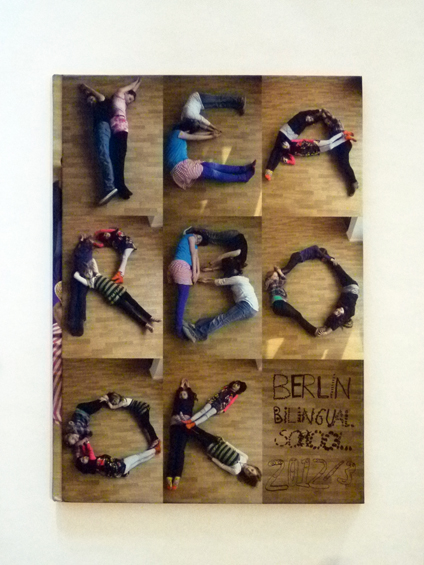 The co-designing experiment was a success: the Berlin Bilingual School Yearbook 2012 / 2013 is out! Apart from it being a very authentic document of a busy school year in this extraordinary school, it looks fabulous.

To co-design a yearbook with a group of kids between 8 and 12 years old in a weekly workshop. Introduce them to basic principles of graphic design and give them the feeling of empowerment that comes with doing things yourself. 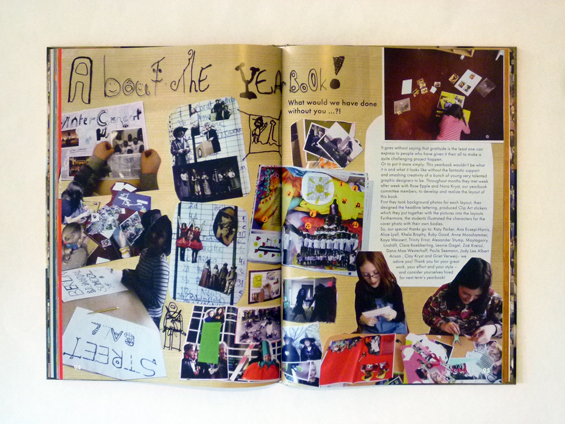 Over a period of four months I met up with a group of 6-12 kids in frantic 50 min workshop sessions every week. To make the layouting possible without having to teach kids a layout programm, I opted for an analogue approach: cutting and pasting with scissors and glue. We started by producing display type, backgrounds and clip-art in individual sessions and then the kids assembled the layouts on their own or in pairs. Once the layouts were finished (stuck together), they were photographed and imported as full page photos in a layout program. The kids left space for texts, working with dummy text which I took off before photographing and added in the final digital document. To learn more about the process read this post. 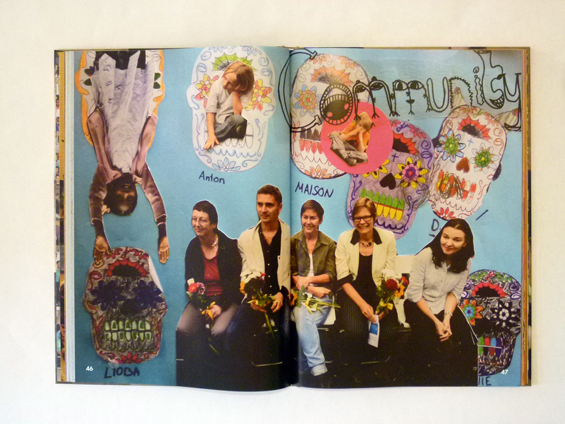 What did I get out of it?

To direct such a process is a curious variation on being an art director. In a way you are obviously manipulating the outcome by setting the parameters, but of course, the kids always do what they want. As a rule, I tried to give them ideas and pushed them a bit, when they didn´t seem to put enough effort in it, but I tried to not impose my design ideas on them. And frankly, they would not let me. My role in the process was one of a design agent, providing the space, tools, materials and the occasional inspiration for an open process. I consider this collaboration as a true co-authorship. 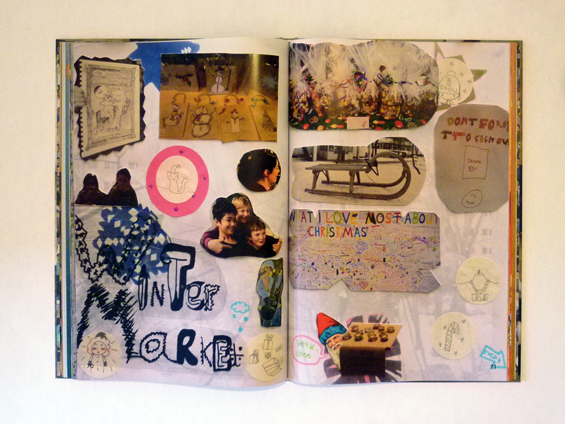 The choice of technique was crucial. As in any open design process, the tools have to be accessible to everybody that wants to participate. In this case, the old fashioned way of cutting and pasting was familiar enough to the kids as not to inhibit them. Sometimes too familiar, I often had to remind them, that they were not creating collages but layouts – a crucial difference. 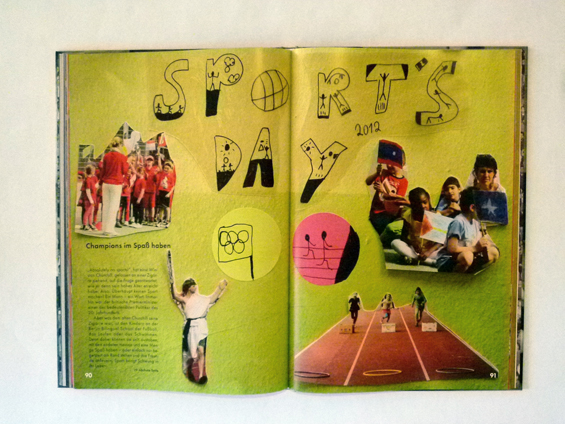 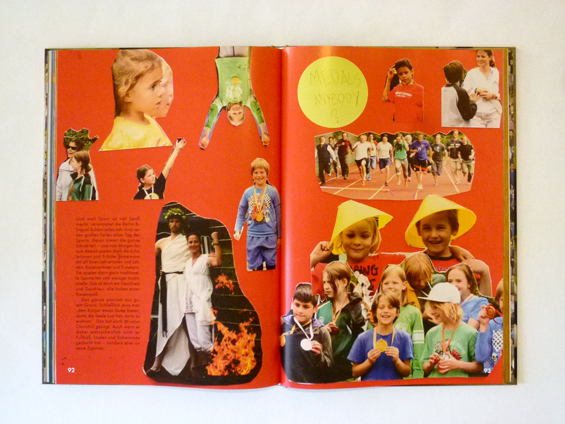 The difficulty is to teach kids something while you have to make them produce a whole book. Sometimes the briefs would have had to be slightly different to be even more illustrative, but then they wouldn´t produce enough material. But overall I have become an advocate of the Anglo Saxon way of “learning on the job”. Some kids really honed their layouting skills over the course of the project in an impressive way. 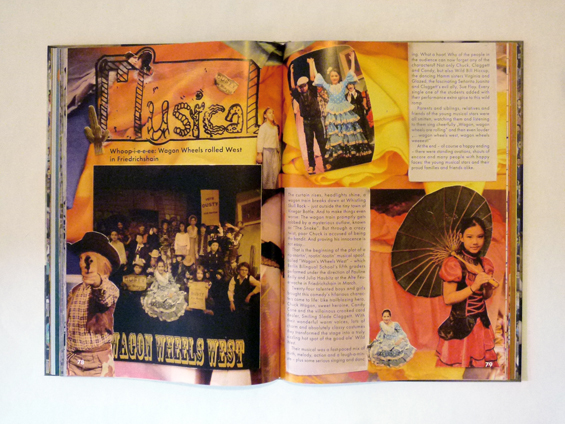 The group dynamics are almost as important as the brief. It took up a lot of time to create the right athmosphere, sort out arguments and put people together in groups. Not so much different to working with adults – although a bit easier to sort out. 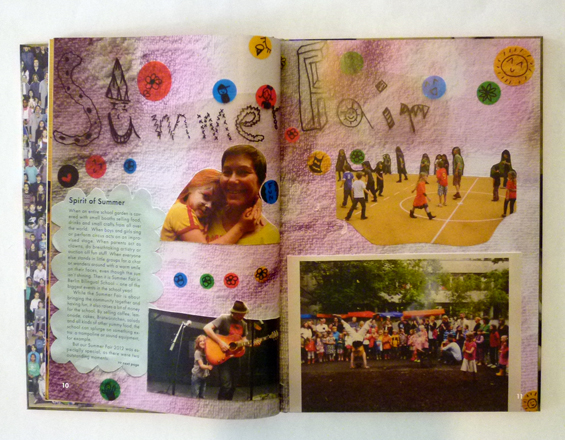 One lesson learned: take nothing for granted. It is difficult to tell in advance what kids already know, and what they don´t: For example a word like “pattern” is unknown, but they have no problem discussing style. Yet sometimes it is the misunderstandings that result in unexpected and fresh design ideas. 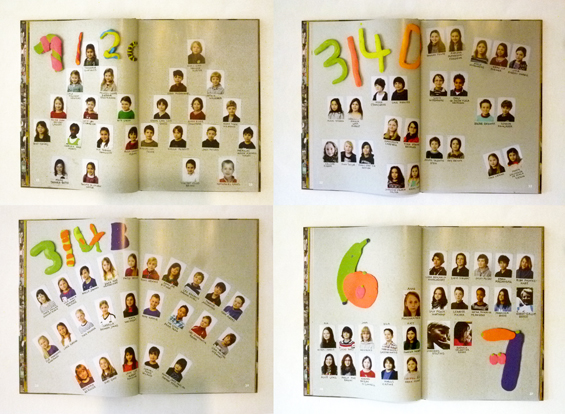 For example I was fascinated by the way they arranged the individual students´ images on the page. Some kids grouped them by gender, some by purley formal considerations and one girl arranged them according to their level of friendship. 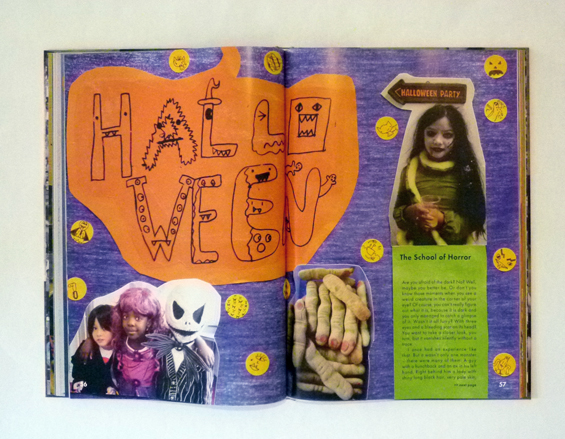 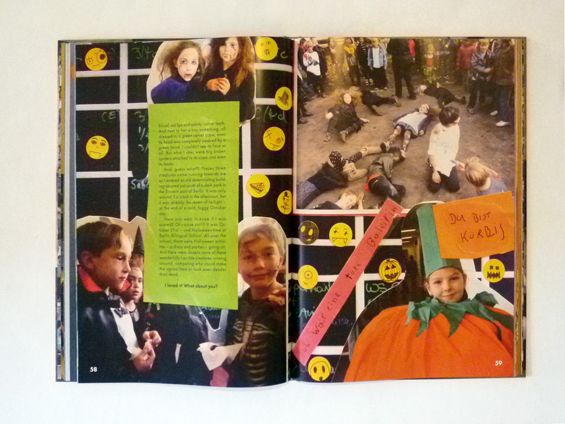 The particular production process of the book was a real inspiration for me. Not only that it makes the design process much more immediate and active, it also produces an intriguing and very three-dimensional aesthetic. To be developed further. 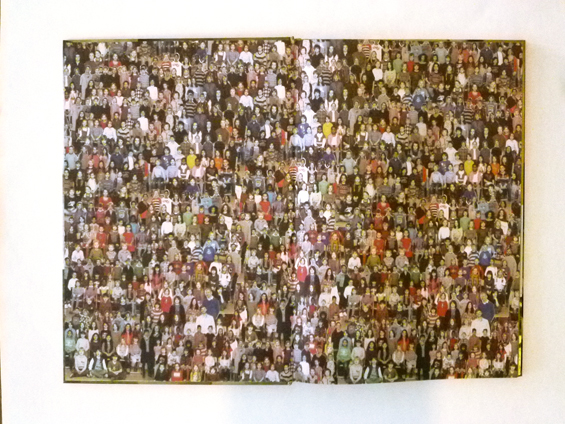 ← from bauhaus to betahaus