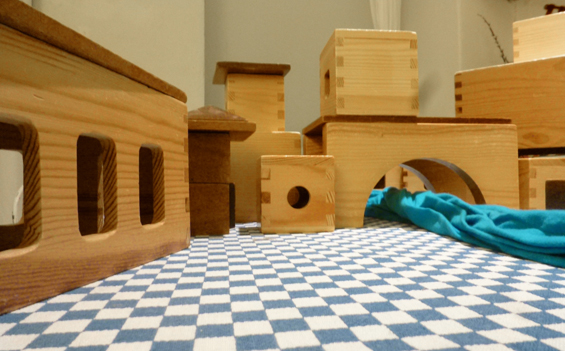 „Children live in cities and they won´t get out of them“, says Alf Howlid from Norsk Form. For most of them, the city starts on the other side of their apartment door. Beyond this threshold lies an outside which is perceived as slightly threatening and out of their control. Children do not think of the city as flexible, not as something that can be shaped by them. Yet, according to the UN Convention on the Rights of the Child, children are “entitled to have a say in matters affecting their social, economic, religious, cultural and political life“, which applies no doubt to city planning. So, what tools do we need to get them involved?

Replace the word tool with toy and you wonder why any kid could ever doubt its possible influence on the built environment. Building blocks are a staple in every nursery and the name of the exhibition and accompanying conference about „participative city planning with children” organized by the Swedish Embassy at the Nordic Embassies in Berlin. Representatives from different initiatives in Northern Europe and Germany met there to compare approaches, discuss problems and exchange experiences about their city planning work with children.

Co-building city models was a tool employed by most parties. But I was intrigued by how different a concept of urbanity emerges, depending on the rules of the game. The resulting model can show cities as conglomerations of architecture, a conflict between owners of adjoining terrains, giant organisms fuelled by interlinking production and consumption cycles, transient networks or as lively anarchy in time and space. Here´s a little compendium of city models designed with children.

This is a city model done by grades 5-7 of the Berlin Bilingual School as part of maths week. Thus with a focus on the construction of 3-D Forms, the city model evolved from buildings the children created irrespective of their position in the city. They started off with residential homes, moved on to public buildings such as schools and librairies, and were finally asked to create landmark buildings, which accounts for the Pisa Tower. Only in the end, when all the buildings were finished, the kids decided on the city´s layout and infrastructure.  They opted for one dominating high street from which smaller streets branch out and arranged all buildings in the resulting grid. 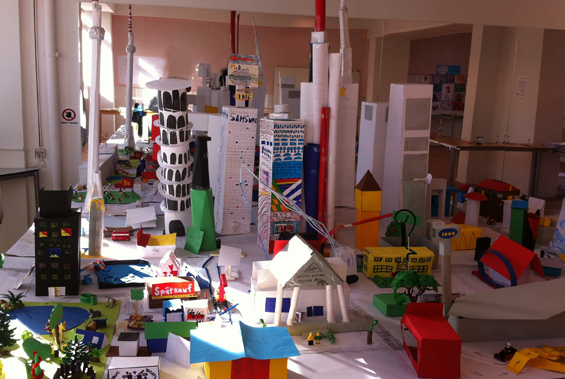 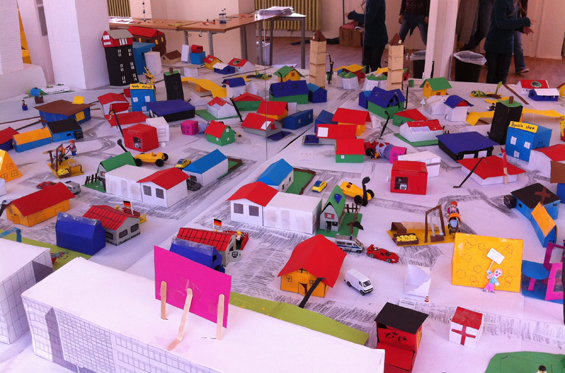 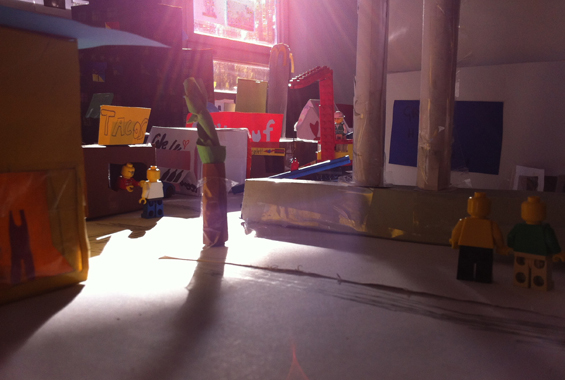 The group Kleine Baumeister (transl.: small builders) created this plan of the city with groups of Berlin school children over several workshops in the Building Blocks exhibition. The city area was divided up into a number of square terrains, each of them designed by a group of kids. The position of each square had to be fixed before the design could begin, as adjoining squares had to “match up”. This meant, that streets had to continue and rivers couldn´t just end suddenly. In the beginning it was still easy to do what you wanted, but the more the plan filled up, the more compromises and discussions arose. Curiously, the kids started the city off with a giant roundabout and  designed mainly public buildings, including a military training ground. 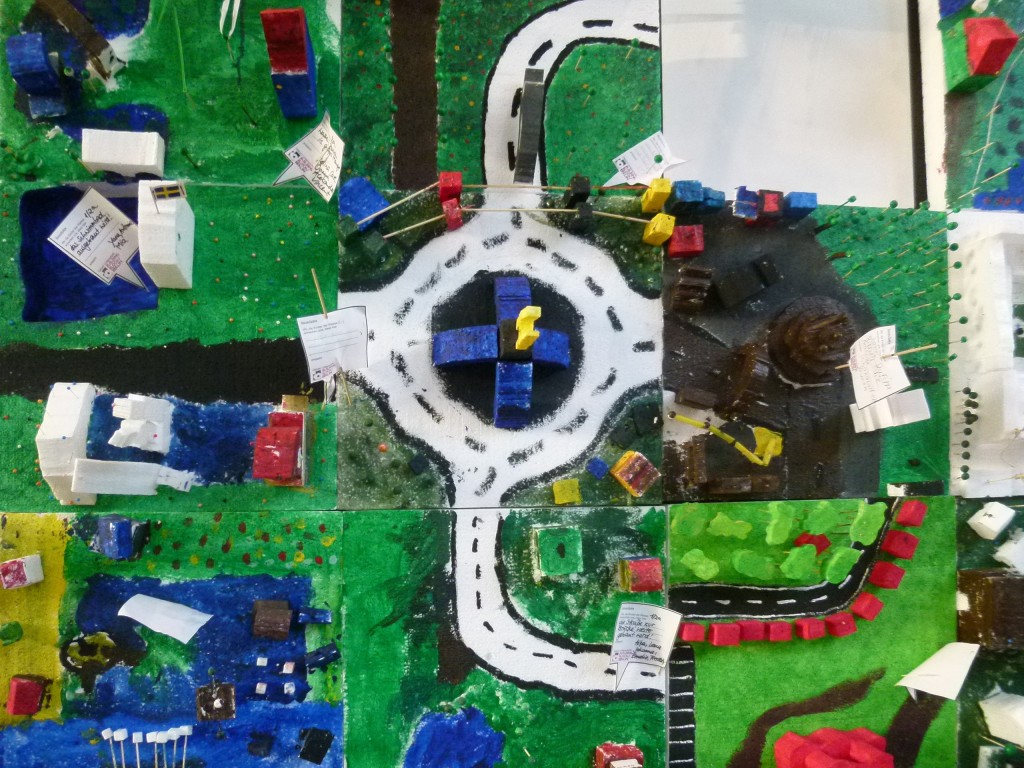 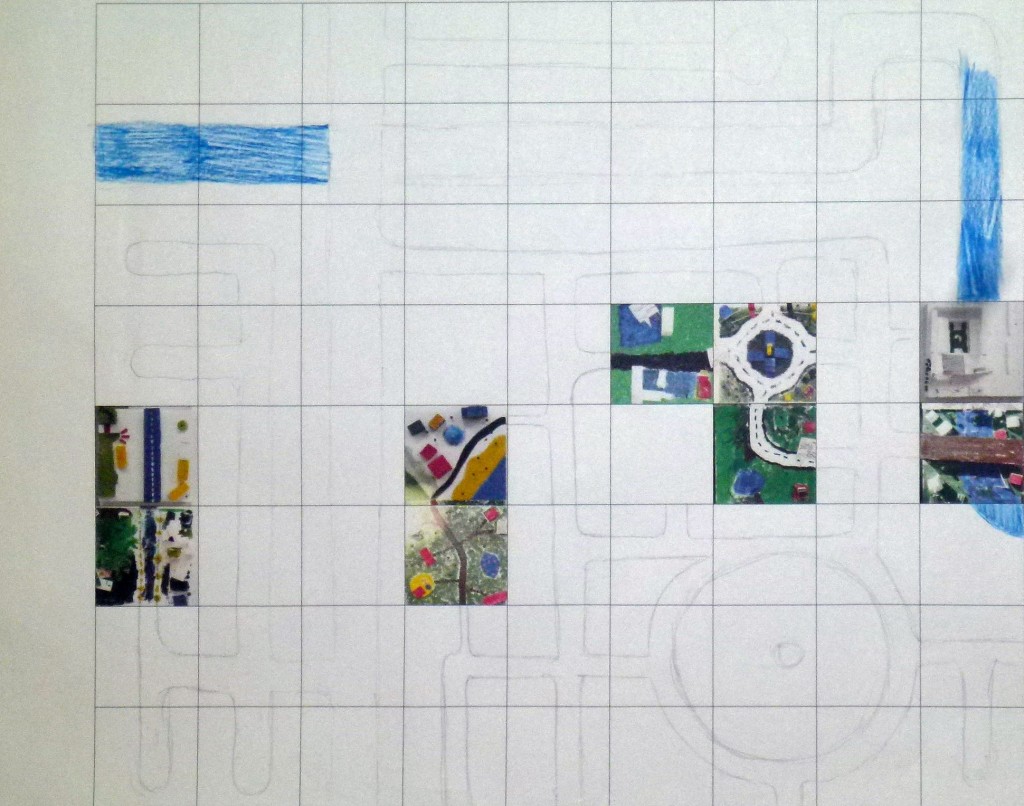 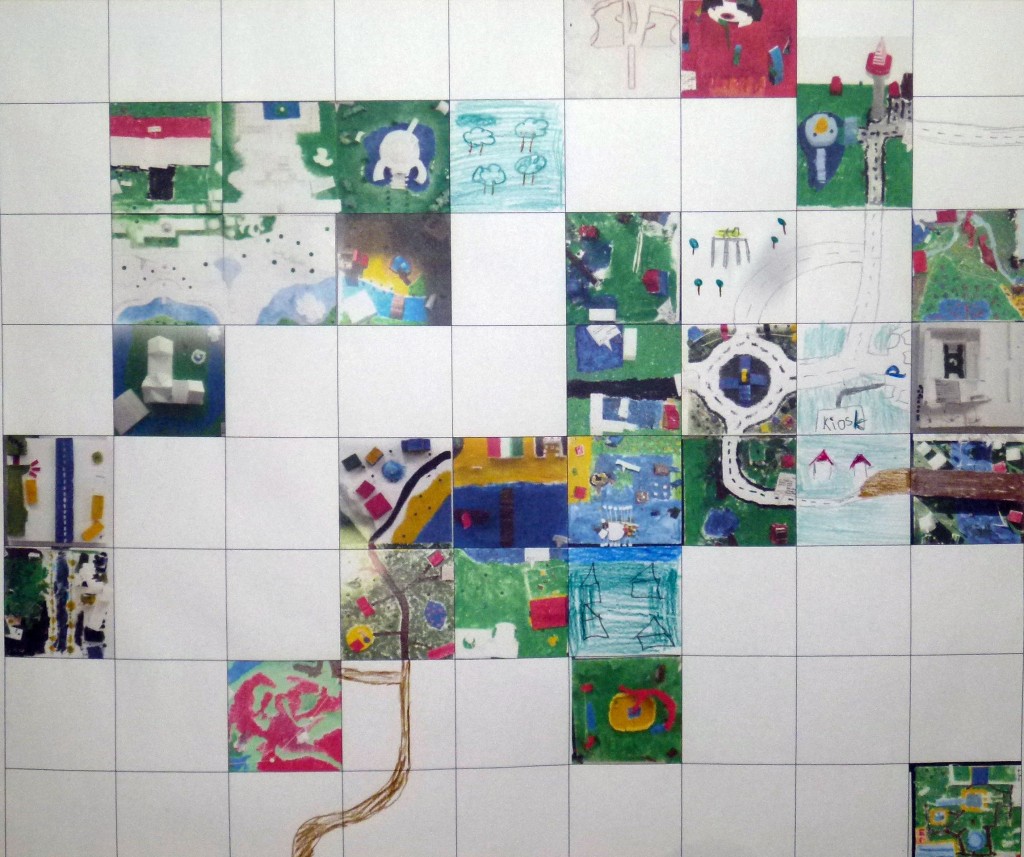 In a workshop concept by non-profit organisation JAS  (youth-architecture-city), also integral part of the Building Blocks exhibition, the kids worked on the basis of a Berlin floor plan. They were asked to contribute ideas in workshops focusing on different aspects of city life. Habitat and means of transport had to be provided, food production, education and energy production organized and free space for children and adults designed. The children developed ideas individually and incorporated them into the city model on colour coded layers. The resulting model very effectively visualizes the interdependence and the simultaneity of the different activities that fuel a city. 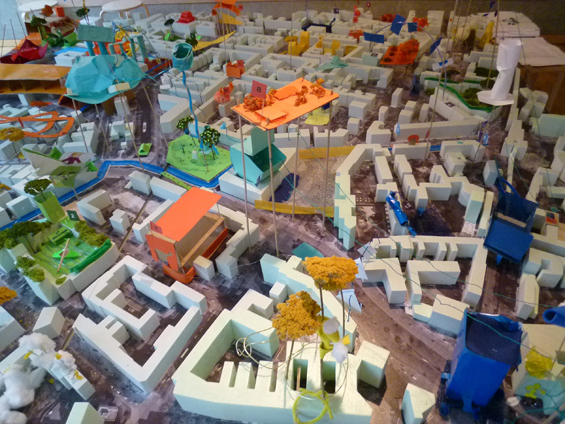 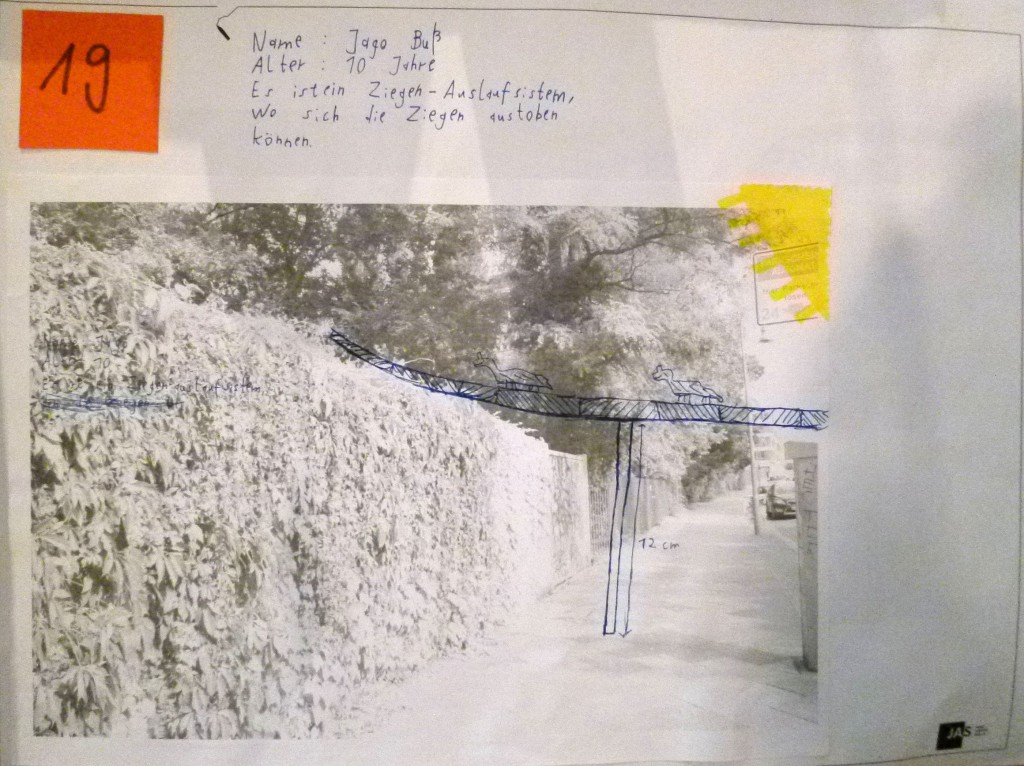 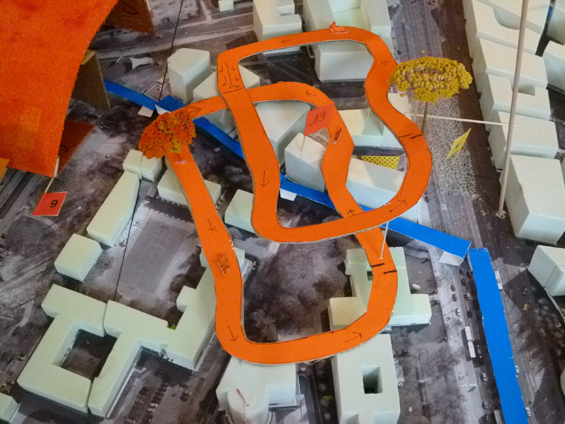 A very complex concept came from Island, by architect Guja Dögg. She stressed movement as a defining experience of the city, by letting kids draw their way to school as a line with their eyes closed. Working with the technique of moulding, she also introduced the idea of negative space as important to city planning. The children happily built a beautiful city over several days. Too beautiful, the architect and teachers decided, so overnight the city was ravaged by natural disasters: tsunamis, volcanoes, earthquakes, flooding. The children were traumatised, there were tears, but there was also work to be done. The survivors had to move from the ravaged parts to safer areas of the city, communities had to accommodate the newcomers, shelter had to be built, surviving buildings appropriated and shared. What a tremendous illustration of the idea that a city belongs to everybody and that it will remain in constant flux.

The last example of a city model was created in a workshop at the London Design Museum by illustrator Sion Ap Tomos. Here, the brief was refreshingly British: build a city – there are no rules and everybody can join in. Adults and children alike spent a delightful afternoon, working at their whim and creating an anarchic, colourful city together.  An idiosyncratic mishmash of different ideals, phantasies, necessities and accidents  – just like most of the cities we live in today. 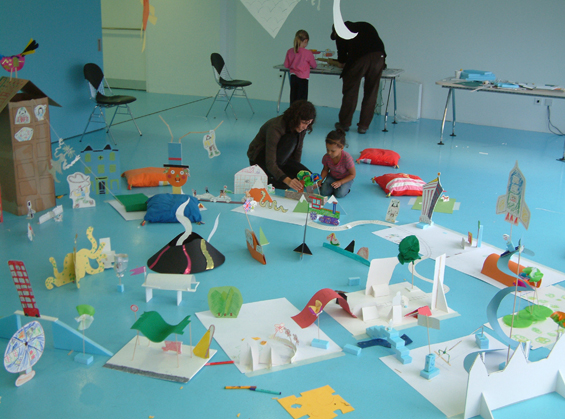 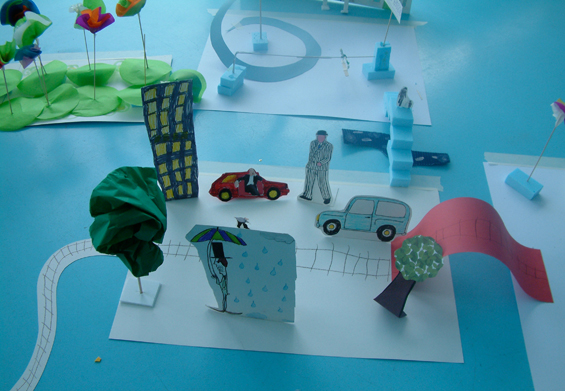 If you have more examples of city model projects with kids, let me know!

Design Thinking in a Nutshell →